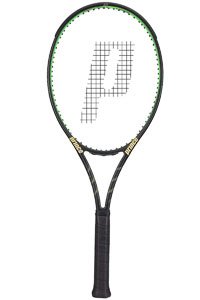 Prince is a brand that’s been around a long time. And like any brand as old as Prince, they’ve got a ton of rackets to choose from.

This can make determining which is the racket for you pretty hard, especially if you’re unfamiliar with the brand…

Which is why we’ve decided to write this guide – to allow you to find the best prince tennis racket for your play style.

Whether you’re an aggressive baseliner or a counter-attacking counter puncher, Prince should have a racket suitable for your time on the court.

Before we take a look at the different rackets that Prince has to offer, it’s worth quickly discussing their different range of rackets and what each one specializes in:

If you’re on the hunt for a lightweight racket, then the Prince Textreme Tour 100 (290) is easily one of the best options out there. The lightest version of the Textreme Tour 100, the racket offers a ton of maneuverability and swing speed for players preferring a fast-paced playstyle without sacrificing much stability.

If you’re looking for something a bit heavier, Prince also offers the Textreme Tour 100 in 305g and 310g variations, with the 310 often being the most common. That said, for me, there’s something about the 290 which is just so fun to play with.

With its 16 x 18 string pattern, you should be able to generate a good amount of spin and power, despite its lighter design. Surprisingly, the racket has a 324 swing weight, which gives the player a nice amount of stability to their shots as well.

With all that said, this is a great all-around racket that doesn’t lack in any areas in particular and is particularly ideal for players preferring a lighter racket when out on the court.

Up next we’ve got the Prince Textreme Beast 100, which as mentioned above, is Princes’ replacement of their Warrior line, with this racket replacing their Warrior 100 specifically.

The main upgrade from the Warrior 100 is the implementation of their Textreme technology. This is a thin carbon fiber piece of fabric that helps to improve the racket’s strength to weight ratio. In turn, this increases the stability of the frame whilst still offering a good amount of comfort.

The racket itself is endorsed by ATP Pro John Isner and its focus is offering a ton of power.

In fact, the racket itself lacks a tiny bit of precision at times, likely because it generates perhaps too much power.

I would go as far as to say that the only downside is the amount of power it can generate, often sacrificing some precision in the process.

With that in mind, if you like big power shots and have the control to get those shots where you want them, then this is a great choice of racket.

Can sometimes generate too much power

I won’t go into too much detail as it’s very similar to the racket discussed previously. The main difference here is that the TeXtreme Beast 98 features a 98 square inch head size, compared to the 100 square inches on the Beast 100.

Due to its smaller head size, the racket is a bit less forgiving, which isn’t ideal with the amount of power it can generate. However, pair the rackets swing weight with some good hand-eye coordination, the Beast 98 can really put away some big power shots.

Another key difference between the Beast 100 and the Beast 98 is the string pattern, with the 98 featuring a 16 X 20 pattern. This can often help harness the power of the Beast racket with a bit more precision.

All in all, this is a big power punching racket, that although hard to use, can definitely do some damage in the right hands.

Next up we’re going to move onto the Phantom line of rackets, especially the Phantom 107G.

As you can probably tell from the name, the racket posses a 107 square inch head size, which is fairly large, to say the least. The Phantom 107G also has a pretty unique beam design that when combined with the racket’s anti-torque technology, creates excellent stability.

The racket itself has a nice speedy feel to it, likely due to its 11.4 oz weight when strong. For the size, this is pretty lightweight and feels extremely maneuverable in hand.

As you’d expect from an oversize racket, it’s got a nice big sweet spot giving it a very forgiving feel. That said, if you’re unfamiliar with oversized rackets, it may take a while to get used to the launch angle of your shots.

What’s more, the racket features a stiffness rating of 63 RDC, which means it’s considered a flexible racket. If you’re a play who frequently suffers from tennis elbow, a flexible racket such as this is often a good idea.

While somewhat different from most of the rackets out here, if you’re a fan of oversized rackets, or want to try one out, then this is one of the best prince rackets for you.

Last up we’ve got an entry from Princes’ Phantom line, in the form of their Phantom Pro 100P. This is a throwback to the old school tennis racquets with their traditional box beam frame and design. That’s not to say it’s bad in any way, just a step away from the more modern designs we’ve been seeing.

Prince has designed a comfort-orientated racket that provides a good feel, comfort, and stability. That said, the Phantom Pro 100P’s open 16 x 18 string pattern allows the player to generate great levels of spin.

The racket itself weighs 11.5oz with a 329 swing weight, which offers a nice amount of stability that goes well with the racket’s 59 RDC and smooth feel. This is definitely a flexible racket and as such, is great for a player who often suffers from tennis elbow and needs a more forgiving racket.

The swing weight does help to generate a bit of power, however, this isn’t the racket’s strongest aspect by a long way.

All in all, I’d say this is particularly suited to players who like a good amount of feel and comfort from their racket.

Who are Prince and Are They any Good?

As previously mentioned, Prince is a brand that’s been embedded into the sport of tennis for some time. Founded in 1970, the name was derived from the founder’s hometown of Princeton New Jersey.

Since then, Prince has gone on to be one of the most popular tennis brands in the world, sponsoring renowned tennis players over the years such as Andre Agassi and Maria Sharapova. Aside from rackets, Prince offers a good range of other tennis-related gear such as bags, trainers, stringing machines and has even begun to develop pickleball paddles.

All in all, Prince has developed a trusted name in the tennis world, one that is likely to be around for years to come.

Which Pros Use Prince Tennis Rackets?

As of the time of writing, 3 pros in the ATP top 100 currently use Prince tennis rackets. These are:

Wilson is a name that’s synonymous with the sport of tennis. Sponsoring some of the world’s elite players, such as the legend himself, Roger Federer. Some of their top rackets include the Wilson Pro Staff, Wilson Clash 100, and the Wilson Blade.

Aside from rackets, they sell a range of other tennis gear such as shoes, bags, balls, wraps, and strings.

If you didn’t like the look of the Prince rackets we discussed in this article, then you really can’t go wrong with a Wilson.

You can check out some of the best Wilson tennis rackets here.

Ah Babolat, behind some of the coolest looking rackets in the world, and, sponsoring potentially the coolest tennis player in the world – Rafael Nadal. They’ve been around as long as time itself, well, since 1875, but in tennis terms, that’s pretty much forever.

Some of their most popular rackets include the Babolat Pure Drive, Aero G, and Pure Strike. If you’re looking for a good-looking, top-quality racket then Babolat is undeniably another great option.

You can check out some of the best Babolat tennis racquets here.

Last up we’ve got another brand worth checking out if you’re not too keen on any of the Prince rackets – and that’s head. Top-level tennis players including Novak Djokovic make use of Head rackets, with some of their most popular options including the Head Microgel Radical, Head Graphene 360 Gravity, and the Head Graphene 360 Speed Pro.

You can check out some of the best Head tennis racquets here.

Well, there we have it. Hopefully, you’ve been able to find the best Prince tennis racket for your play style and preferences.

Having used Prince rackets since a teenager, I’m sure whichever you choose you’ll be happy with, but if you’ve got any questions, please feel free to get in touch via the contact section below.

Thanks for stopping by!

Found This Useful? Why Not Give it a Share?

Hi, my name's James and I've been an avid fan of tennis since a young age. I remember sitting on Henman Hill (now more commonly known as Murray Mount) as a child watching Wimbledon with some strawberries and cream (yum). I'm an avid Federer fan (who isn't right) and refuse to believe the legend will ever retire.

This site does incorporate paid advertising and affiliate links. Mind the Racket is a participant in the Amazon Services LLC Associates Program, an affiliate advertising program designed to provide a means for sites to earn advertising fees by advertising and linking to amazon.com. Contact us: [email protected].